By re-basing the S&P 500 in gold, we see the true magnitude of the equity cycle over the last 80 years. Although the dollar based series is volatile, the true size of swings in the S&P 500 has been masked by movements in the dollar.

The current equity bear market began in 2000 and still has room for a further fall, based on previous cycles. It will only be brought to an end through a renewal of the entrepreneurial zeal of the early 1980’s. A mind-set that led to big falls in government intervention in the economy.

Perhaps the most amazing fact is that the S&P 500 in gold stood at 1.1 ounces on October 1928, giving us a price higher than the ratio today. There has been a long stream of dividends since then, but the real price of the equity market is lower today than the level of 84 years ago! 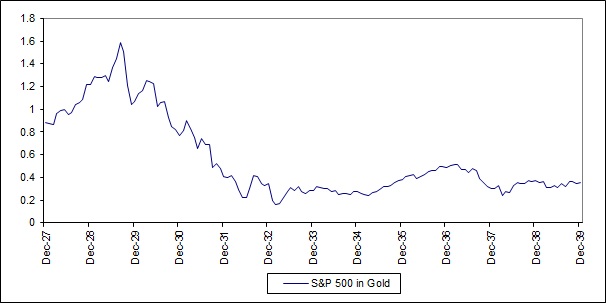 The S&P peaked in August 1929 at 1.58 ounces of Gold, before plunging 90% by February 1933 where it bottomed at 0.16 ounces. From there the equity market recovered somewhat back to 0.5 ounces. Unfortunately, this recovery was short-lived as the market halved again in the late 1930’s.

The 1930’s was in many ways a similar decade to our own. Politicians attempted to engineer a recovery through intervention and inflation in the early 30’s, which failed. In saying that, the politicians of the 30’s would balk at the scale of fiscal and monetary intervention being undertaken today. 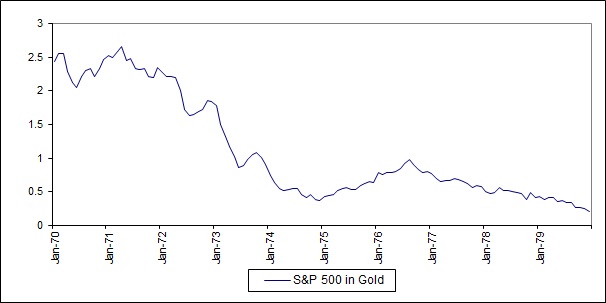 The 1970’s is perhaps the most similar experience to today. The discipline of the Gold Standard was left behind, which opened the reins of politicians to try monetary and fiscal indiscipline. It failed; just as it is failing today! 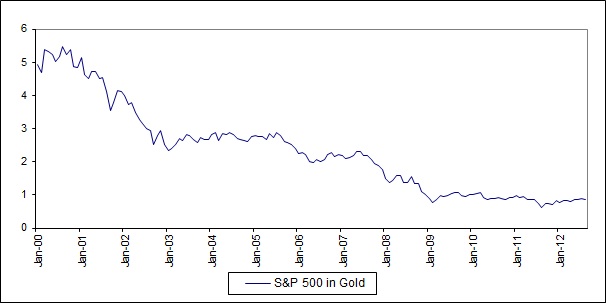 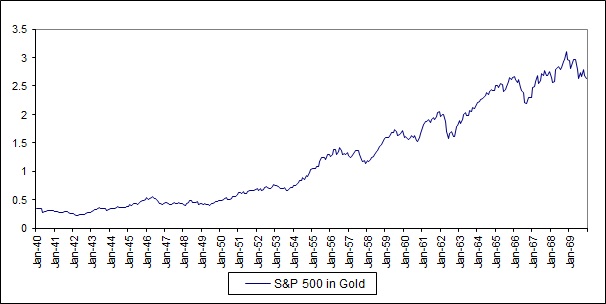 This was a grand era of prosperity. The monetary experiments and interventionism of the 1930’s were forgotten. However, indiscipline started to creep in during the 1960’s that would form the root of the problems in the 1970’s. 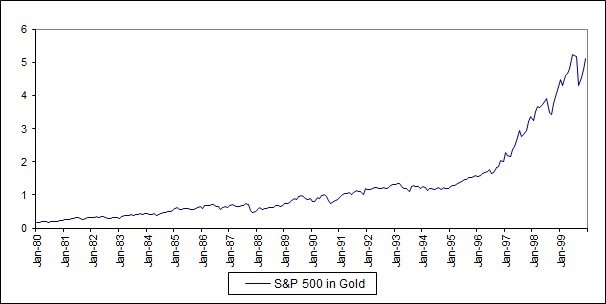 The whole basis for the 20 year bull-run was monetary and fiscal reform that was undertaken in the early 1980’s. Politicians turned against inflation as a way to deal with economic problems and rolled back state intervention in the economy.

Re-basing the S&P 500 in gold reveals the true swings experienced in the equity market. These huge cycles have gone on for decades and been driven by political & economic decision making.

So what can we learn about previous cycles and apply to our current time?  The current equity bear market began in 2000. At current valuation, the S&P 500 in gold still has scope to fall further. The cycle will only be brought to an end through a renewal of the entrepreneurial zeal of the early 80’s. A zeal which brought about big falls in government intervention in the economy.