Further analysis, conducted into the composition of bank liabilities, reveals the predominance of business lending over other types of lending up to the mid-1980’s. From that point onwards, real estate lending became more sizeable and has been the dominant driver of the business cycle.

When considering which measure of money supply is most accurate, I initially adopted the money of zero maturity (MZM) measure. I was looking for a measure of money that included holdings immediately redeemable at par value. I inherited this idea from the writings of the Austrian Economist, Murray Rothbard. The essence of the idea is that the public only regard holdings as money that can be immediately redeemable at face value. Holdings that are not redeemable at par value are regarded as investments, rather than money.

However, it struck me that any US dollar based liability created by the commercial banks could be regarded as money. If a member of the public shifts some of their capital from an instant access account to a limited access account, is it really legitimate to remove it from the money supply?  The banks are, after all, putting themselves on the hook for all the liabilities they create, regardless of whether the liabilities are immediately available at par value or not.

I have settled on using what many would consider a very broad measure of the money supply, which is to look at the total domestic currency based liabilities of the banking system in the applicable country. My thinking may evolve further on the matter, but this is where I am for now. 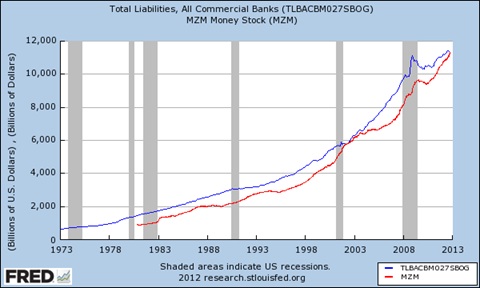 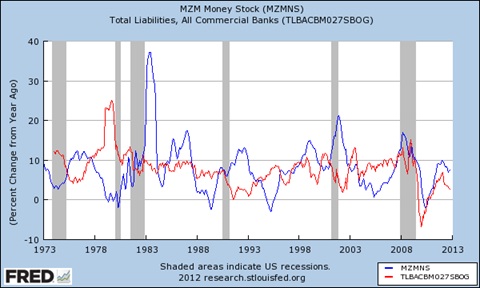 Aside from the size of the money supply, we must also consider its composition. In the chart below, I have split the commercial bank lending book into its 4 major components: commercial, real estate, consumer and other lending. 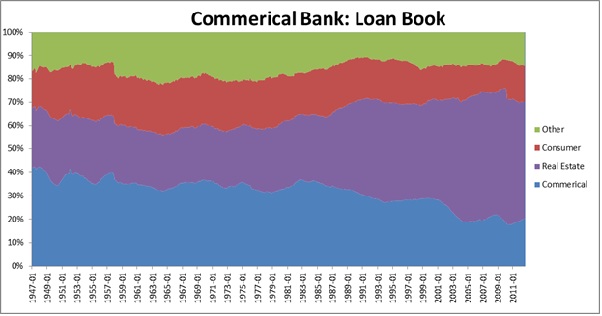 Notice the shift from a predominance of commercial lending in the pre-1980’s period, to a predominance of real estate lending after then. We see why the ‘business cycle’ has morphed into a ‘real estate’ cycle as bank lending has been funnelled into that area. More detail is revealed when we focus on changes in the specific categories. 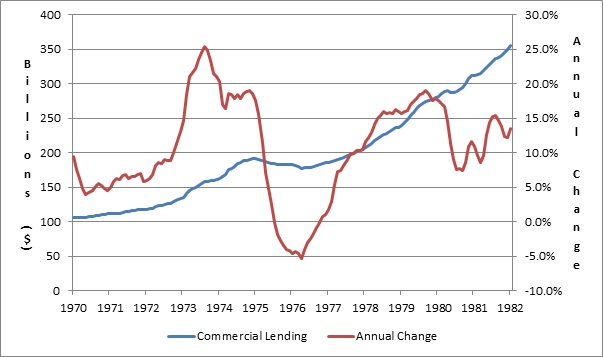 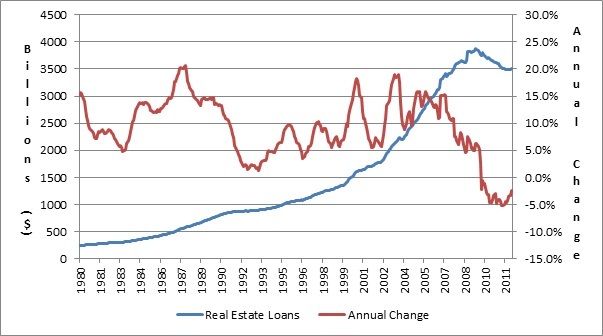 In my money supply analysis, I have gravitated to using the total dollar liabilities of the domestic banking system. This figure represents the total amount of dollar claims they are on the hook for. The measure has shown a closer affinity with the business cycle than more traditional measures of the money supply, such as the MZM.

The composition of loans within the commercial bank balance sheet reflects the changing nature of the business cycle. We have gone from a business cycle to a real-estate cycle, as real estate loans became larger than commercial loans in the mid-1980’s.

With lending for real estate falling, the only sector now willing to borrow is the public sector. I suspect that just as the last crisis was caused by the insolvency of real estate borrowers, the next crisis will be caused when lenders to the Western governments decide to call-in their loans.