Economists, investors and politicians around the world rely on an accurate measure of price inflation to aid decision making; but does the CPI measure inflation correctly?

Having looked into the matter, I have been struck by the inadequacy of the CPI to measure inflation and the resulting distortions in decision making that the CPI produces.

Accurate measurement of price inflation is a vital function. Not only is price inflation used to rebase asset returns and real interest rates; but it is also used to index payments and costs. It’s no exaggeration to say that people’s livelihood is put on the line by a blatantly incorrect CPI calculation.

I’ve seen many mistakes made by investors over the years, but I regard the attachment to CPI as by far the most serious and costly error. Once the measure of inflation is corrupt; all the real data that professionals use is then corrupt. They are no longer able to comprehend the economic situation around them and make poor investment decisions as a result.

Why the CPI Does NOT Measure Inflation

The same effect is in place during periods of rising living standards. People switch into higher quality goods as their incomes increase and this changes the CPI consumption basket. The improvement of quality within the CPI basket causes a large upside bias within the CPI number over time, relative to the true rate of price inflation.

The CPI measure is TOTALLY UNSUITED to measure price changes across a CONSTANT STANDARD OF LIVING. All it does is measure price change across a variable basket of goods, for the average consumer. This makes it a totally invalid measure of price inflation for investment purposes. 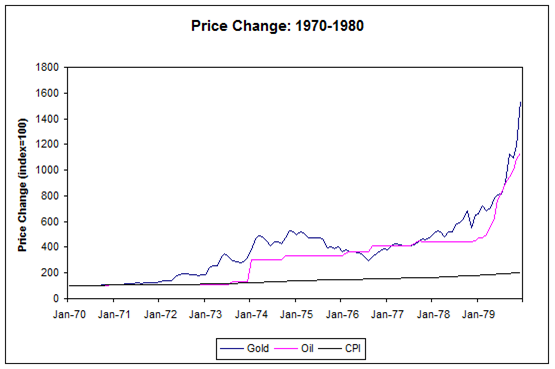 The 1970’s is an example of a decade where living standards were falling. In this environment, the CPI exhibits a large downward bias relative to the true rate of price inflation. We see that commodity prices went through the roof during the 1970’s – a trend that the CPI measure was unable to reflect. 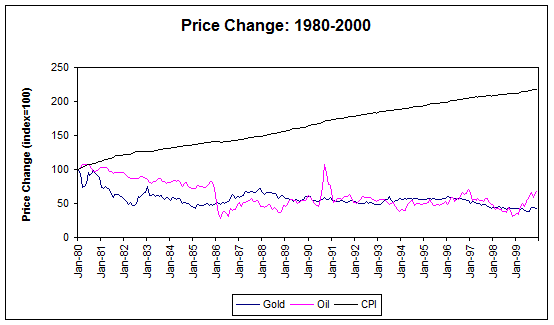 We see the opposite effect in the 1980 & 1990’s. Reforms in the early 1980’s produced economic growth. The quality of goods within the CPI basket improved and the CPI measure grossly overstated the true rate of price inflation. Gold and oil prices actually declined over the 20 years in question, yet the CPI measure continued to float relentlessly upwards. 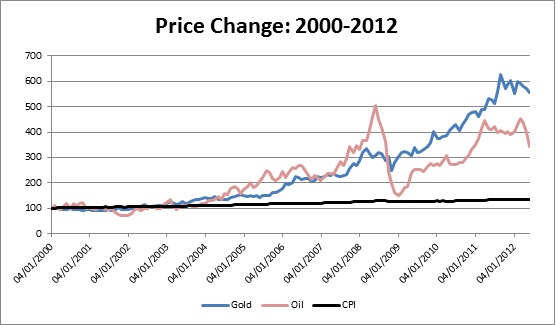 Looking at the last 12 years has been a case of déjà vu back to the 1970’s. Poor economic performance has led to a huge under-reporting of price inflation through CPI, relative to moves in commodity prices. Almost nobody believes that the CPI is accurately measuring the inflation rate.

Conclusion- Does the CPI Measure Inflation?

In order to measures price changes across a constant standard of living, it is useful to measure the price movement of physical commodities (where quality does not vary). An ounce of gold is still an ounce of gold & a barrel of oil is still a barrel of oil, regardless of any changes in living standards. For this reason, I use commodity prices as my measure of inflation.