The perception of a straight linear relationship between the money supply and inflation is not backed by theory or practice. The true relationship is captured by measuring monetary growth NOT BACKED BY ECONOMIC GROWTH, rather than monetary growth alone. By grasping this relationship, you are able to model and understand the high price inflation we are experiencing.

Monetary Base is NOT a Measure of Money Supply

The first point to make clear is that the monetary base is not money and not a measure of the money supply. You will hear commentators refer to the Fed’s quantitative easing program as “printing money”. In actual fact, it would be more accurate to call the Fed’s program an attempt to get the commercial banks to create money.

Clearly the Fed’s QE attempts have led to a HUGE rise in the monetary base, but this has NOT led to a large increase in money supply, as measured by MZM.

However, the FED hasn’t increased the reserves in vain. It was concerned about a collapse in the banking system. It is safe to say that without the increase in the monetary base, we would have seen a DECLINE in money supply. So now we have the picture straight for the money supply; let’s move onto its relationship with inflation. 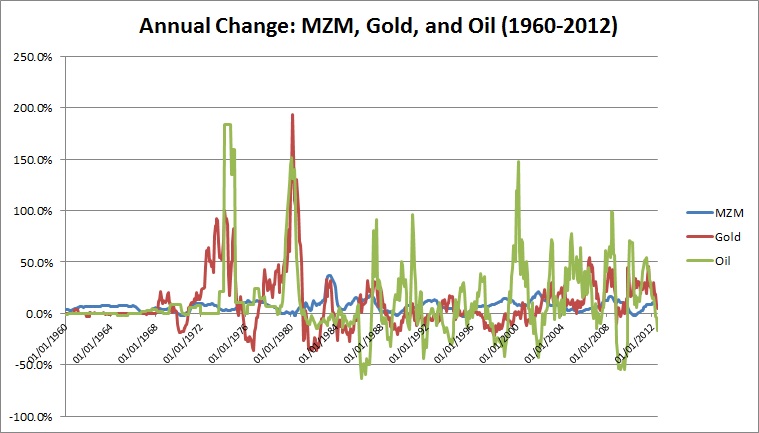 The perceived relationship is that every increase in dollar money supply, will lead to a proportional increase in prices. But it doesn’t take very much insight to see the flaws in such an argument. What if the economy is growing? Do productivity increases not mean that prices should GO DOWN as it becomes easier to make things? How has the theory worked out in practice?

Using gold or oil as a measure of price change (see my article on flaws in the CPI), we see that changes in the money supply are TOTALLY INADEQUATE at describing changes in prices.

There was a big increase in commodity prices in the 1970’s and yet monetary growth was not unusually rapid, while the 1980’s and 1990’s were times of falling commodity prices, even though monetary growth was just as substantial in these decades. The reality is that the traditional view is simply not able to capture the relationship between money supply and inflation.

We experienced a large increase in commodity prices in the 1970’s in spite of tepid monetary growth because productivity was decreasing over the decade. Prices went up as America got poorer and could demand fewer goods per dollar.

We had a decline in commodity prices in the 1980’s & 1990’s because productivity was increasing, even as the money supply was increasing at a slower rate. Each dollar could demand more goods on a like-for-like basis as its intrinsic purchasing power increased.